Choreographies
After an education in classical dance at the Hamburg Ballet School I continued my study at the Rotterdam Danceacademy.
In my choreographic work I am searching for ways to let the body collide with different external stimuli. In my pieces Tableau Doublé, and TanzTanz (2007) I am using a wide range of images taken from various historical, cultural and aesthetic contexts, which are processed by the performers into a living collage of poses, gestures and movements. I am interested in the human body as a container, mediator, a void which binds, a body that transmits unique situations and experiences and travels between movement and image. Rather than looking for highlights I am searching for a variety of details existing equally next to each other. I want to invite the audience to read the choreography moment for moment, I want them to trust and confront their own imagination.

2006 I founded together with other recipients of the danceWEB scholarship/Vienna Sweet&Tender Collaborations, an artist-driven initiative that focuses on self-organization of artistic processes and production and emphasizes collaborative forms of working.  Since then I have worked and collaborated with many artist that are involved in Sweet & Tender. During Sweet&Tender Collaborations 08 in Porto I started working with Christoph Leuenberger. Our first piece UNIEK was premiere at the Springdance Festival in Utrecht (NL) in 2009. In Winter 2010 we continued together with Anja Müller: I I I- a collective approach towards solo was premiered in April at Kampnagel Hamburg, toured internationally and was invited to the 8:tension series at Impulstanz/Vienna 2010. 2010 I initiated the Sweet & Tender meeting “Treffen Total”, a cooperation with K3-Center for Choreography/Tanzplan Hamburg. The piece "Haut" (2012), again a collaboration with Christoph Leuenberger, deals with make-up art in performance. In "ALL" (choreography for four dancers 2013) I use the method of image meditation to start the impossible attempt to create a world of all worlds on stage. My piece "DUETT" deals with the touching and expressive effect of music to dance. From season 2014/15 till season 2016/17 I receive the conception funding of the Hamburg Department of Culture. The three pieces that I will produce at Kampnagel in the context of this funding each focus on different aspects of the relation between audience and dance: In the first year possibilities of proximitiy, in the second year reception and in the third year participation. During this longterm project I will introduce a new form of public rehearsals: In a series of OPEN STUDIOS audience is invited to witnes and join rehearsal processes. The choreographies are developed in continuous dialogue with potential audience members.

Next to my choreographic work I teach regulary professional dancers as well as amateurs and young students in different contexts. Also I am working as a coach and choreographer for the Hamburgian band Deichkind.


Press
Contact
Sweet and Tender Collaborations
Teaching
Video
Jenny Beyer sees images and detects movement under their surfaces. And she sees music; its rhythm makes the images flow. Her dance takes up the impulses lightly, as though it were dabbed onto the space, yet still it sketches remarkably clear shapes. 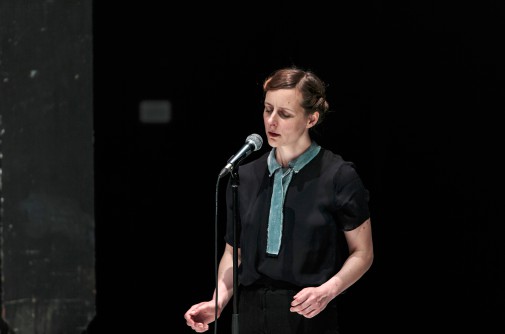